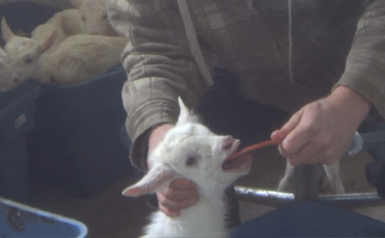 LCA has released the results of an undercover investigation into the practices at Escarpment's Edge Dairy (EED), a goat farm in Caledon, Ontario.

LCA's investigator witnessed goats being dragged and pulled by their legs, goats crawling on their knees with overgrown hooves, and goats with lesions and infections.

Due to concerns about the care and wellbeing of the animals at EED, LCA filed complaints with the Ontario Society for the Prevention of Cruelty to Animals (OSPCA), the Ontario Ministry of Agriculture, Farm and Rural Affairs (OMAFRA), and the Ontario Provincial Police (OPP).

At the time of this release, no charges have been laid against EED.

What You Can Do:

1. Urge the Government of Ontario to act and form a qualified organization to enforce animal protection laws in Ontario immediately.

Email: This email address is being protected from spambots. You need JavaScript enabled to view it.

2. Contact Gay Lea Foods and pressure them to stand by their commitment to promoting high standards of animal welfare and ask them not to do business with EED.