Year of the Pig: 5 Amazing Facts about Pigs

Feb 04 Posted by Jerome in Blog 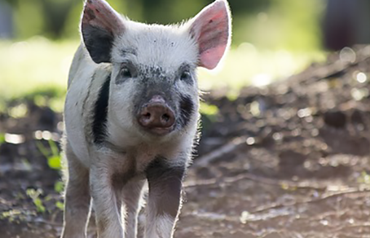 February 5, 2019 marks the start of the Chinese New Year, also known as the Lunar New Year. Each year, this annual celebration — which occurs between January 21 and February 20 in conjunction with the cycles of the moon — is represented by one of 12 animals based on the Chinese Zodiac.

While last year marked the year of the Dog, 2019 is the Pig — the last Zodiac animal listed in the Chinese lunar calendar, which represents happiness, honesty, and good fortune. While unfavorable characteristics are generally associated with pigs, such as dirtiness or laziness, nothing could be further from the truth! Keep reading to learn of five amazing facts you didn't know about pigs!

Pigs are incredibly social creatures and form close bonds with others. Pigs are constantly communicating with each other (mother pigs have even been known to sing to their babies!) and have a diverse vocabulary of squeals, grunts, and oinks — each with their very own meanings! Sadly, on factory farms, mother pigs spend their entire lives crammed into tiny gestation crates and their piglets are taken away soon after birth in order to be fattened up and slaughtered for meat.

Pigs' affinity for rolling around in the mud has given them a bad rap for being dirty, but they're actually one of the cleanest animals! Due to the fact they lack sweat glands, pigs often cover themselves with mud in order to stay cool. When given the option, they also use the bathroom away from areas they typically eat and sleep in. However, on factory farms, pigs are forced to live in deplorable conditions in their own feces and urine.

3. Pigs are smarter than dogs

Contrary to popular belief, pigs are incredibly intelligent — and are even smarter than your average three-year-old! Ranking number four in "smartness" behind chimpanzees, dolphins, and elephants, pigs are terrific problem solvers and have impeccable long-term memories. Isolated on factory farms, pigs are not mentally stimulated and suffer from extreme boredom and chronic stress, often leading to depression and self-harm.

Like humans, pigs feel pain, fear, and loneliness. They also have individual personalities and have been known to show compassion and kindness to others (animals or humans) that are in distress. Due to the deplorable, cramped living conditions prevalent in slaughterhouses, pigs often suffer sever psychological and physical abuse and act out with stress-related behaviors as a result, including excessive biting. To deter these behaviors, factory farm workers clip their tails and teeth so they cannot cause harm to each other.

While they might look slow, pigs are great sprinters and can actually run a top speed upwards of 11 mph! Confined in tiny pens, pigs are heavily restricted and can barely move until they're considered fat enough to be slaughtered.